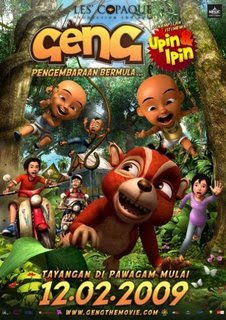 Last weekend, my Zharfan, hubby and I went to watch the above movie - utilising the GSC vouchers that I won from Kotex contest (Ceria Setiap Bulan -December '08). 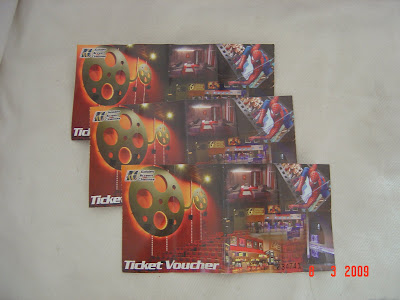 I have read a few good reviews about the film, so I really llok forward to watch the movie. My Zharfan was equally excited as he is the fans of Upin & Ipin ;)
We arrived there 45 minutes before the show time...and guess what..the tix were almost sold out...except the first front row seats...we had no other choice, so we took up that seats...huh... 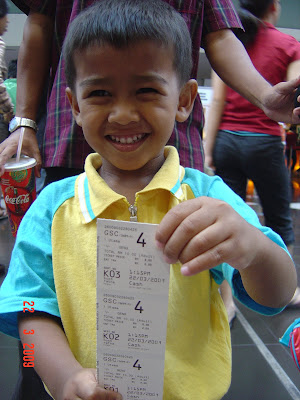 The movie has set its won record by being the longest showing movie in Malaysian cinema...It has been officially released on 12th Feb 2009...yet after one month, it is still showed, with almost full house still...awesome!

After getting our popcorn and ice lemon tea drink, we entered the theater ..Wow….it was already almost full, full with people, all family with kids! This movie must be special then.. So, we sat and enjoyed the movie.

Yep, I enjoyed it very much. The movie was marvellous!. Although it was not as excellent as Disneyland cartoon movies, but this product is for me the best Malaysian cartoon movie so far. Well done to the director and everybody who have worked very hard making this movie.I must say that for a meager budget of RM4 million, the first Malaysian 3d animation film is not just a good film, but an outstanding one.I think this is a proud moment for Malaysian cinema and also the local animation industry in particular. I foresee that this film might grab some awards in the upcoming whatever film festival in Malaysia or maybe even overseas. There was enough humor and suspense and positive message. Plus lil bit of touching scene when Oopet has to say bye2 to Rajoo...

So here is the synopsis that I copy paste from Les' Copaque web:
"Something disturbs the peace in the village of Kampong Durian Runtuh. Villagers tell of a fearsome beast lurking at night but no one dares to find out what it is until Badrol, Lim and their newfound friends stumble upon the very heart of the mystery itself. A small peculiar animal, not native of the forest befriends Rajoo and brings the whole gang into an adventure deep into the exotic Malaysian rainforest filled with dangerous animals including an age old mystical giant snake. Join the gang as they embark on a journey of action and adventure set upon the warm atmosphere of a Malaysian village enclosed by landscapes of greenery"