Yesterday I had the chance to watch this movie with hubby at GSC 1Utama (just the 2 of us!!! kind of 'dating' again) - I sent my boy to nursery, since my hubby took a day off ;),after all, the movie is not meant for a child at my boy's tender age..

Well, actually, we watched the movie for free as I was using RAM Double Movie Passes which I won from a TV9 contest (Kuiz Filem @9) 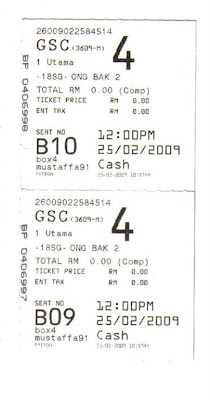 Eventhough it is not my fav genre (my fav of course romantic comedy), but I would say it is a good action movie - packed with fighting scenes from the start till the end, with very minimal dialogue uttered (in Thai language -is it Tagalog?? emm)... there was also few touching scenes like when Tien's (the hero ie Tony Jaa) parents were brutally killed by the enemy in front of his eyes...sob..sob...

Well, a day before that, my younger brother and his wife went for preview screening of the movie "Seven Pounds" (lead actor Will Smith) at TGV KLCC...it was a free screening of course - a consolation prize of 4 tix that I won from InTrend magazine (Feb 09 issue - first time buying this mag & try to join its contests)...since I couldn't make it, I gave it to my brother, rather than wasting it anyway ;) According to him, the movie was not bad, but the plot was quite twisting and lil bit hard to understand..

I still have 3 open GSC movie passes to be utilized which will expire end of May (I won it from Kotex Ceria setiap bulan contest-December 08)..so purposely saving those passes for next movie - hopefully to watch my fav genre - emm..looking forward to watch 'Marley & Me' ;)